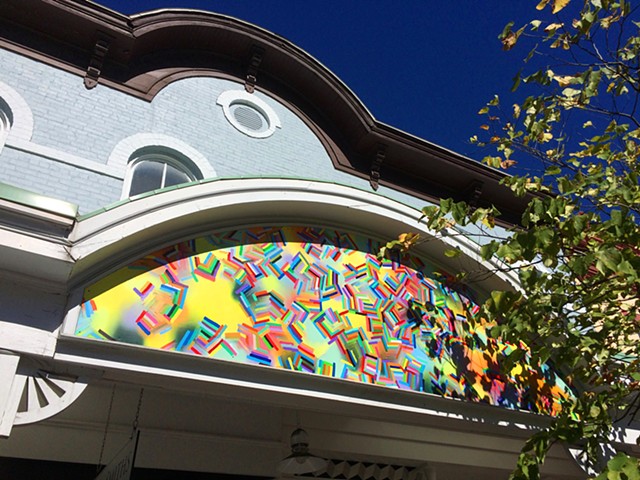 Emily’s Bees, is a mural installed in the old town center in Kingston, New York. Made of three conjoined sections I painted it nearby at my friends’ studio during some days just before and during the 2016 O+ Festival. Appreciating the festival’s theme, Mother of Invention, I worked intuitively, absorbed in the present. The palette decisions began with International Optimism Yellow, a paint color that is its own art project by local conceptual artist Uncle Riley who gave it to me as a gift when I arrived for the festival. The composition and structure of the mark making was influenced by the honey combs hanging in my friends’ studio where bee hives sit in the garden just beyond the door. For several days I worked from early in the morning until late in the evening observing the brilliant autumn light move across the garden and through the room. As it did so I keenly felt the temperature change through all my senses, watching with interest as chill stunned the sun-drunk frenzy of the bees. The local public radio station was another of my constant companions while I worked. Playing largely classical music, the station’s commentary and announcements gave a shape, both internal and external which was at once charmingly idiosyncratic and abstractly ethereal, to this community I was visiting for the first time. I enjoyed with singular specificity all of the new sensory stimulus as a respite from the familiarity of my routines back home in Chicago. I’d be remiss if I didn’t also mention the impact of the convivial atmosphere in the Kingston arts community on the delight I took in creating “Emily’s Bee…”.